SCOTT PILGRIM VS THE WORLD: THE GAME!

//// Probably the best promotional piece we had on this.

//// This is the first BG mock up i did.
I'd say it ended up looking pretty much like it. 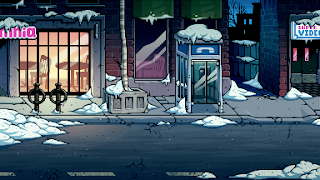 //// The game was kinda put on "hold" at some point for time and budget reasons and this is an option that was actually considered... 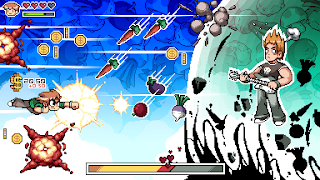 //// Those are some hipster studies i did based on Paul's sprite.

//// Those were drawn mostly by Jonathan Kim and Mariel Cartwright
and I tweaked and cleaned them in pixel. 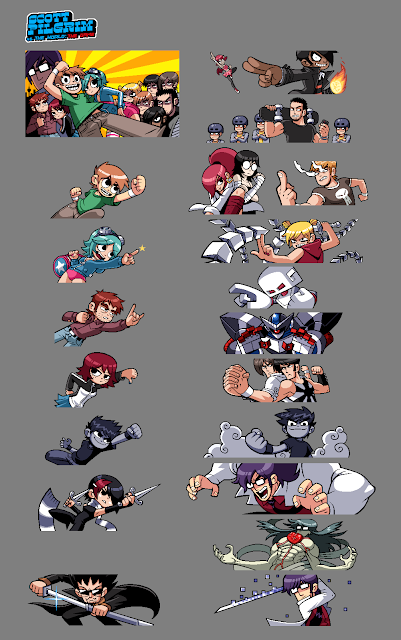 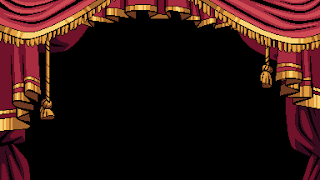 //// The original intention in the game was basically to have every possible character from the book as bosses, enemies or NPCs. So there would have been mid bosses in every levels before each exes. Obviously we had to cut a lot of those and also some level parts, so I've kinda put the concepts and studies back in here.

//// WORLD 1
Sub-boss would have been CRASH AND THE BOYS, we kept them as NPCs in Patel's intro.

//// WORLD 2
Here we thought of having a skateboard handrail grind chase sequence after Lucas' fight with the RPM's meter in a top corner or something, but it implied whole new sets of animation for every playable character so...

//// WORLD 3
One of the only level we were able to keep Envy and Lynette as sub-bosses.

We talked at some point about having an alternate battle inside Honest Ed with Todd creating crazy weapons from all the junk around him.

//// WORLD 4
This one originally started with a beach level with the guys from Super Spike V Ball as mid bosses, then a street part with a fight against Winnifred Hailey before getting on the street car.

And then there would have been a china town street part before the restaurant. That's maybe one cut I'm happy how it turned out.

But then I really wanted to have the players cross Ramona's house before jumping down in her garden to fight Roxy, this is one of the thing I kept as long as possible before having to finally cut it.

//// WORLD 5
Julie's party started with an October, Halloween themed street bit that was cut, but we were able to keep Robot-01 as a sub-boss.

Then we got to do this unique Super Fighting Robot Boss battle, but we had to drop a lot in the Twin's lair. It originally had 3 floors instead of one: a basement dungeon one, which was kind of twisted back in WORLD 2 as the nuclear set and a hunted mansion-like 2nd floor and then the Double Dragon 2 inspired shrine where you should have fought the energy twin dragon's from the movie as the sub-bosses before getting down to business with the K twins.

//// WORLD 6
This one was meant to be a bit longer to really feel a progressive weather change from winter to spring to summer and then to the eerie cemetery part.

I also had this idea of making a "Nega" counter part to every character, so whomever you'd play with would get to fight his own evils, but it didn't make it through game design.

//// WORLD 7
Here we were supposed to actually have a "lair of cool shit" section and a bar part before fighting Gideon. 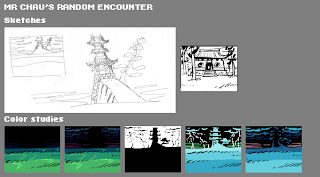 //// SUBSPACES
I thought we would have a lot more of those and we wanted to have the characters fly through them instead, or do all kind of cool tricks and references to old games like looping screen and stuff like that but it ended up being too much work for everybody.

One deception for me is the second fight with Gideon in here, we had a big placenta bubble thing to go over the mutated evil exes lower body part that would have made it clearer as what to attack exactly but it's integration was constantly pushed back until it was too late T_T.

//// ENDING CUTSCENES
It was meant to look more like old game endings where the characters are on a cliff and look at a vast land while credits unroll. I tried something...

//// EXTRA GAME MODES
I think this is something you'll need to download or unlock if I remember correctly.

//// DODGEBALL
Here I re-used the WORLD 4 beach level idea and we actually put the Super Spike V Ball dudes that Paul had designed in the crowds.

//// BATTLE ROYAL
And finally here is a little homage to some french marketing guy who kept promoting the game as being "all about kisses and cows", the tag line for the game being "kisses and chaos".

//// This is as good as it gets!
We've worked on this project for a year, half of it in Montreal where we were unfortunately very poorly managed, with an unqualified team and inappropriate tools which all got the game nearly canceled and drove everybody on the core team near depression. Then we had 5 crazy über intensive months in Chengdu's studio, where we had no time left and were all going completely crazy trying to pull this off.

Now it's done, it's out there and it should still kick ass pretty good!

Paul Robertson was lead animator on this and did all playable characters and strikers, almost all bosses and other things here and there;

We also had a lot of help from most of Chengdu's studio, mostly on the programming and secondary animation side;

And I was in charge of all the backgrounds and over all graphics supervision as you can see here.

[ Feel Good Hit of the Summer - Queen of the Stone Age ]
© all rights reserved to Stéphane Boutin Posted on 23.8.10

Just wanted to say that this is a fantastic look at the process, and what you guys were able to pull off under stressful conditions -- particularly what must have been a massive monster of a looming deadline -- is pretty incredible.

Looking forward to seeing what you all go on to next!

I think some pictures well not show. :( can you fix them?, and good pictures of the game by the way :)

Fantastic work all around. And thanks for the candid look into the development process.

I bought and played through the game on PS3, and I plan to do it again on 360 very soon. Even for nothing more than supporting the cause of great art and animation. I want to encourage great games and gorgeous work - tell the incompetents to go make their own game ;)

It's amazing to see the design process like this, it's a shame that parts of the game were cut entirely, but it's nice to see that the game was released with amazing four player coop. :)

Just wondering, what resolution does the game actually render in?

thanks everybody!
I'm not really used to get this much visibility and so i discovered that my comments were kinda crude sometimes but i'm glad to know you like to actually know about that stuff ^_^

but don't get me started! i think i did my share of bitching during this whole unbelievable process @_@

Amazing work man! I bought the game a week ago, been playing it nonstop. The amount of work really shows. This game looks beautiful and its a ton of fun!

I really hope you guys can release a DIRECTORS CUT version, I would love to see all those stuff you guys wanted to add. The game is amazing, but it could be way more amazing. If you guys still have the chance to do so, do it, I bet Ubisoft can see the game is awesome and is selling well, so I hope they can do a Directors Cut of it!

Wasn't there also a clothing store that was also cut? "Justin's" in the shopping district of level 1? I remember seeing outfit changes in one of the trailers and it appears to be in the "SHOPS" photo. I'm bummed Scott can't wear his X-men coat.

Bravo! Thanks for posting this and letting the fans know what happened. Hopefully, we can see some content in DLC form in the future? Fingers crossed!

Knives (playable), Online Co-op and the dodgeball game would be an excellent package - just a suggestion! :D

Oh man, thank you SO much for posting all of this!
You didn't have to do any such thing, but you did... It's very generous of you~!
I'm going to put this stuff to good use. Nothing illegal, of course. :3

Wow, thats almost every graphic of the game! just amazing the work, the sketches, the animations.. and the gameplay itself also very cool

Say, could you reupload some of the pictures in this post, they aren't showing up anymore.

Thanks for the article! I am also researching freelance websites online. There are a lot of Websites providing freelance works like up work. But they are charging 20% which is too high for me after a lot of research now I'm working at https://www.fieldengineer.com, I'm very satisfied working here. Please list out more websites in your next article so that users like me get to know more about freelance jobs site. Thanks!

Game of the season, SEO Company Dubai or at least the best game i have seen all year. It was an Amazing game and i know a lot of peopel didnt watch it.

Financial improvement is conceivable just through the creation and option of pay to the economy.An coordinated exertion is exceptionally basic to accelarate and support the growth.By Integrated effort,I mean ,
website packages uaethe positive effect of extra item and administration into society.Similarly a decent advancement need the making of new pay in all areas (down-driven)of the society.Everybody need to add to the general public as per their aptitudes and capacity.